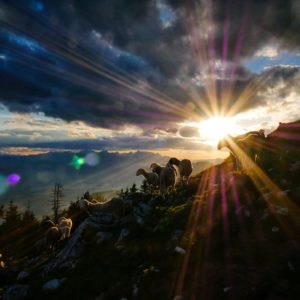 The Joy of Seeing Christ in the Old Testament

Many Christians I know who regularly spend their time reading the Bible spend the majority of their time in the New Testament. This is understandable for sinners saved by the blood-bought grace of Jesus. Who doesn’t want to read through the gospels and epistles that so clearly express this wonderful truth in our lives?

Many Christians get hung up in the Old Testament. Some approach the Old Testament reluctantly (if at all), and only see vast amounts of purity laws and ancient history, which seem irrelevant to twenty-first-century Christians. Others read the Old Testament with vigor, hammering through the passages and applying old covenant laws to their lives, independent of the New Testament as if they were ancient Israel.

Either way, both groups often end up either bored and give up on the Old Testament, or they become burdened by its laws in their attempt to apply them in unhealthy ways. Jesus, though, said to do neither. Instead, he said to read the Old Testament knowing that it is all about Him (Luke 24:44-47, John 5:39).

For the Christians who have heard this wonderful truth, we know it is easier said than done. Most of us can see Jesus in the passages like the prophecies found in Psalm 22 or Isaiah 53. But Jesus seems to imply that all of the Old Testament is about Him.

How do we steer from reading the Old Testament in an unhealthy way, to seeing Christ in the passages? First, we must see the big picture.

In Genesis 3:15, after Satan deceived Adam and Eve and the world was plunged into sin, God made a promise that through the descendants of Eve He would send a man. That man would be bruised, yet through that process, He would crush the head of Satan. In other words, Jesus would come into this earth, He would be crucified, but through His death and resurrection, He would conquer death, sin, and Satan. From Genesis 3:15 forward, the rest of the Bible is about God fulfilling that promise.

That is the first step in understanding how the Old Testament points to Jesus. Before we zoom in and pick apart each verse looking for prophecies and parallels to Jesus (which isn’t wrong), we need to first zoom out and see the Scriptures as one big story of redemption, and it’s in that way that we properly see how each passage points to Jesus. This will help us avoid the common error that we make when we seek to find Jesus in verses that aren’t meant to represent Jesus. Saying that the tent pegs to the Tabernacle represented the nails on the cross sounds nice, but more than likely, the tent pegs represented tent pegs.

Seeing the big picture is key. And it is through seeing the Old Testament as a story of redemption that we see Christ saturate every detail. When we keep God’s promise from Genesis 3 in mind and understand that the Old Testament is the shadow and Christ is the substance (Colossians 2:17), suddenly those long lists of genealogies that previously seemed irrelevant (and nearly impossible to pronounce) come alive with anticipation. Why? Because every name mentioned is a reminder that God is working out His promise to bring Jesus, who will victoriously crush the head of Satan. Likewise, every victory, like David slaying Goliath, is a small picture and reminder of that greater victory of Jesus over death, sin, and the Devil.

But it’s not just the victories that point to Jesus. Every sinful failure on Israel’s part, like the sin of David and Bathsheba, showed their desperate need for the grace of Christ purchased on the cross. This Gospel-centered imagery is evident in events like the Passover and the Bronze Serpent. It’s evident in the roles of priests, who act as mediators between God and Israel. It’s evident in every sacrifice that was burnt on the altar. All of the Old Testament – every event, title, prophecy, and law is a glimpse of the Christ to come (Matthew 12:40, John 3:14, 1 Corinthians 5:7, 10:4, Hebrews 10:1-14, 4:14-16, etc).  They may not all point to Christ in the same way, but they all point to Him and His work nonetheless.

Now contrary to some objections I have heard, when we point the Old Testament to Jesus Christ, we don’t destroy the practical applications of the Old Testament stories. Seeing Christ in the Old Testament doesn’t mean we can’t learn from David’s failures or Israel’s sinfulness in the wilderness. It likewise doesn’t mean we can’t learn about and desire the great faith Daniel had or the God-loving heart that David had. Rather, seeing Christ in the Old Testament helps us understand how to rightly apply these stories to our lives. Hebrews 11-12:1 gives a long list of men who had great faith in the Old Testament. We are to be encouraged by their examples, and to some extent, we ought to desire to imitate that. If we want to imitate these men rightly, we must fix our eyes not on the laws or the principles, or even the men themselves, but on Christ, as Hebrew 12:2 makes clear. For though many of these men were great, all of them had their eyes on heavenly things where Christ is seated, because they needed Jesus just as much as you and I do.

When we see the Old Testament in light of Jesus, we don’t destroy its essence, we enrich it. We see God’s grace as Jesus, who is the rock and the living water, followed Israel through the wilderness in the midst of their sin (1 Corinthians 10:4). We see the weight and power behind the words of God when He told Abraham to not sacrifice his son, because He will provide a sacrifice, namely Jesus, His only Son. We see vivid imagery of the blood of Christ on the Cross not only in the Passover, but also in numerous passages such as Exodus 24:8, when “Moses took the blood and threw it on the people and said, ‘Behold the blood of the covenant that the LORD has made with you'” (see also Matthew 26:28).

If you want to find joy in reading the Old Testament, don’t read it through the lens of irrelevant stories or mere over-bearing laws. Rather, see the grace it all points to. Read the Old Testament and see God’s redemptive plan. See Jesus.

This article was originally published by For the Church, on October 21, 2016.

Ian Conrey teaches high school history and Christian thought courses at North Georgia Christian Academy. He holds a B.S. in Christian Ministries from Point University and has been attending Reformed Theological Seminary in the pursuit of earning a M.A. in Biblical Studies. Ian has been married for ten years; he and his wife have two children.

Why Do I Need the Church, if I Already Have Jesus?

What’s the big deal about joining a local church? I can get the podcasts and music I want — when I want it. Can’t I have church in the woods, … Continue reading

Cuties and Cardi B

Awareness versus Exploitation Our world is going crazy right now and I’m not talking about the Coronavirus pandemic. I’m talking about how we are rejecting God’s plan for sex and … Continue reading