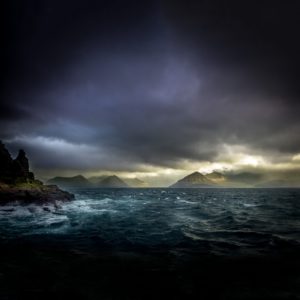 Just before the Great Chicago Fire burned virtually all of Horatio Spafford’s business investments, he watched pneumonia take the life of his four-year-old son. As a result of both tragedies, a dear friend of the Spafford family, Dwight L. Moody, suggested that Horatio, his wife Anna, and his four daughters, Tanetta (age 11), Elizabeth (9), Margaret Lee (5), and Annie (2) take a trip to England where they may seek comfort for their loss.

Having to stay behind for business reasons, Horatio sent his wife and four girls on to England, assuring them that he would join them within a couple of weeks. However, not long after their departure, Horatio received a haunting telegram from his wife.

It read, “Saved alone, what shall I do?”

Horatio learned that the ship, Ville Du Havre, which bore his family across the Atlantic, struck an iron sailing vessel and sank. All four of his daughters had drowned. Immediately, Horatio left America to join his wife in England, but on his trip, the Captain informed him that they were approaching the location where his four little girls had lost their lives. It was then that Horatio penned these powerful words…

When peace, like a river, attendeth my way,
When sorrows like sea billows roll;
Whatever my lot, Thou hast taught me to say,
It is well, it is well with my soul.

Though Satan should buffet, though trials should come,
Let this blest assurance control,
That Christ hath regarded my helpless estate,
And hath shed His own blood for my soul.

These are not the words of some man trying to write a trendy hymn, these are the words of a man who is broken and completely helpless, pouring out his shattered soul to God. As the father of two, I cannot even comprehend the weight and sorrow Horatio must have felt. How he was able to stand, much less pick up a pen, is beyond me.

Some of us understand how Horatio was able to do what he did because we have had a glimpse of the power and the excellence of Christ. You see, when a person encounters Christ, something happens. Something magnificent. Their eyes are opened and they behold the glory of something far greater than themselves or anything else in all creation. Jesus Christ eclipses and transcends even the deepest sorrows of this world.

You see, for the Christian, those very moments when we are buried in the valley of the shadow of death, raw and undone, those are also the very moments when God becomes very big, and we drink deeply of the truths and the love of Jesus Christ. So even in the midst of loss, we are satisfied beyond compare. We are as sorrowful, yet always rejoicing (2 Cor 6:10).

My favorite line in Horatio’s hymn is the glorious reality of the victory of the Cross. The reality that God the Father lost His Son for our sake, to turn sinners into children of God (John 1:12).

My sin—oh, the bliss of this glorious thought!—
My sin, not in part but the whole,
Is nailed to the cross, and I bear it no more,
Praise the Lord, praise the Lord, O my soul!

The Gospel is the wonderful truth that expresses God’s love for us. That God not only saves sinners by His own sacrifice but He also restores all of creation. One day, we will be with God in His Kingdom, along with the rest of the broken who turned to Christ. And there, in that place, there will be no pain, or death, or tears, or sadness. But only endless, exceeding joy and celebration.

Let the one who has a broken heart, the one who cannot overcome their own sin, look to Jesus and be satisfied. For He gives grace to the humble, and to the thirsty He will give from the spring of the water of life without payment (Rev 21:6). As Matthew 5:4 declares, “Blessed are they that mourn: for they shall be comforted.”

This article was originally published by For the Church, on June 29, 2016.

Ian Conrey teaches high school history and Christian thought courses at North Georgia Christian Academy. He holds a B.S. in Christian Ministries from Point University and has been attending Reformed Theological Seminary in the pursuit of earning a M.A. in Biblical Studies. Ian has been married for ten years; he and his wife have two children.

Good Shepherds Always Point Their Flocks to the Great Shepherd

Anyone who has been a pastor for more than two minutes has likely felt the burden of what it means to shepherd God’s flock. We’ve all felt the pastoral pressures … Continue reading