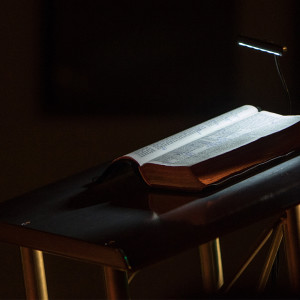 “My brothers, show no partiality as you hold the faith in our Lord Jesus Christ, the Lord of glory. For if a man wearing a gold ring and fine clothing comes into your assembly, and a poor man in shabby clothing also comes in, and if you pay attention to the one who wears the fine clothing and say, “You sit here in a good place,” while you say to the poor man, “You stand over there,” or, “Sit down at my feet,” have you not then made distinctions among yourselves and become judges with evil thoughts? Listen, my beloved brothers, has not God chosen those who are poor in the world to be rich in faith and heirs of the kingdom, which he has promised to those who love him? But you have dishonored the poor man. Are not the rich the ones who oppress you, and the ones who drag you into court? Are they not the ones who blaspheme the honorable name by which you were called?” – James 2:1-7

Wow, this really hits us the core of who we are and how we treat people. Remember, James just told us what pure devotion to Christ looks like — looking after orphans and widows. Now, he’s talking about how we treat everyone. What’s important is that we remember that all of our interactions must be characterized by our “faith in the Lord Jesus Christ”.

This changes everything. He is literally saying, “do not have faith in Jesus with favoritism.” Now, this doesn’t mean that we won’t like some people more than others. To think otherwise would be unrealistic. He’s talking about the way we represent Jesus to others. We need the Gospel to be our filter to learn how to treat the less-privileged and we need to stop evaluating things through the world’s standards.

What’s happening here? He’s talking about when God’s people are gathered for corporate worship. How in the world can we justify meeting together to focus on the Gospel and then discriminate against someone because of their physical appearance or perceived social status? Talk about hypocritical!

There is both a spiritual and practical application for this. First, on the spiritual side, God loves sinners, and His people should love sinners with the Gospel. When we gather together, we should treat every person that visits us with the love and dignity they deserve as humans. We are all created in God’s image and for a relationship with Him. We cannot allow ourselves to look down on people because they look poor. Nor should we view someone as having more value because they look like they have money. In 1 Samuel 16:7, the Lord told Samuel that the people of Israel based their opinions on who should be king on mere physical attributes.

What about the practical consideration?

The truth of the matter is that, more often than not, (especially in the first-century context James was writing) wealthy people lack faith. And in this context, many of the rich people were oppressing Christians. So then it is antithetical for them to show special attention to the rich and dismiss the poor. And let’s be honest, James makes such a great point when he says that God has chosen poor people to be rich in faith.

This makes sense, it is easier to trust in God when you realize that there’s nothing else for you to trust in. The opposite is true for the rich. They seem to have everything they need, so why trust in God?

It’s easier to trust in God when you realize that there’s nothing else for you to trust in.

So how should this affect us today?

Well, we need to make sure that we are viewing people the way God sees them. Remember that you are surrounded by eternal souls, created in the image of God, and for the Gospel. Your job is to love them with that Gospel faithfully. We also need to remember that we are not of this world, nor do we view people according to the world’s economy.

Lastly, we must be overwhelmed by the riches that are lavished on us in the Gospel. You may not have much money, but if you are in Christ, then you have received the Kingdom of God as your inheritance. Christ is our older brother and coheir. Live like that means something.

“If you really fulfill the royal law according to the Scripture, “You shall love your neighbor as yourself,” you are doing well. But if you show partiality, you are committing … Continue reading

James 1:26-27   If anyone thinks he is religious and does not bridle his tongue but deceives his heart, this person’s religion is worthless. 27 Religion that is pure and undefiled … Continue reading