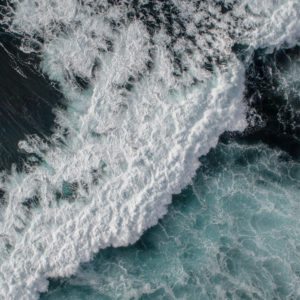 Let Doubt Drive You to Christ

“Oh the depth of the riches, the wisdom, and knowledge of God! How unsearchable are His judgments and how inscrutable His ways! ‘For who has known the mind of the Lord, or who has been His counselor? Or who has given a gift to Him that He might be repaid?’ For from Him and through Him and to Him are all things. To Him be glory forever. Amen.”

This past year, we saw massive destruction caused by hurricanes in Puerto Rico, Texas, and Florida. Here in the mountains of NC, we watched and prayed for the people living in these areas and for those of you living in areas affected. Many not only saw it but they lived it out first hand.

Back in 2004, a giant tsunami in the Indian Ocean destroyed coastal towns. Tens of thousands of people were killed. This catastrophe was the biggest tidal wave of the last century, and early that morning, no one knew what was about to hit them. So much damage was caused that entire cities had to be rebuilt in the aftermath. Many people were on vacation and lost their lives at a time and place they should have been relaxing and relieving stress.

There was one interesting group of people I read about during this time. There was a team of scuba divers who were out on a morning dive enjoying the beauty of the ocean’s depths. When the wave hit, they had no idea of the chaos passing above them. They described the experience as “being in a washing machine”. They tumbled and were tossed around but they were safe. The reason they didn’t suffer death was that they were deep enough down in the ocean that they remained somewhat stable.

In James 1, the Bible says that doubt causes us to be tossed about like a wave of the sea. The best way to deal with the storms of doubt, anxiety, and fear in my life is to dive deeper into the depths and truths of God’s Word and of personal praise and worship of Jesus.

Romans 11:33-36 gives us two great truths to hold onto when we are facing the storms of doubt and fear:

How about you? When doubts, fears or anxieties arise do you try to deal with it on your own? Do you look to others to help you? Look to Jesus and His Word! He will strengthen you, grow you and keep you.

What Does the Bible Say about Fighting Depression?

What does the Bible say about depression? Through the hope and mercy of Jesus Christ, we find that there is meaning in your depression. Christians, we have a hope that … Continue reading

Four Plumblines to Parent with Grace

By Seth Stewart What does it mean to be a Gospel-centered parent? As a youth minister who is also a parent, I certainly don’t have all the answers, but I … Continue reading