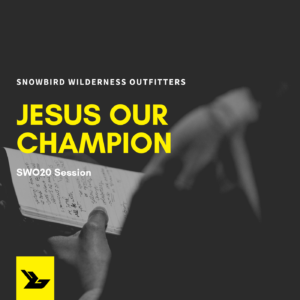 When David challenged Goliath, the Philistine giant, his trust was in the Lord.

In Genesis 3, our first champion (Adam) failed and we became slaves of sin. We are made in the image of God, that image has been tainted by the stain of sin and brokenness within our hearts.

Genesis 1:26 reminds us that God’s good design established our first parents to rule over everything as ambassadors of God’s glory. But, in Genesis 3:1, Adam and Eve crushed under the temptation of the serpent. It’s not about the fruit. They followed their desires of rebellion because they wanted to be like God (and us with them). We weren’t made to receive that glory!

Hebrews 2:6-18 is our message of rescue! Christ identified Himself with humanity, became human, and went to the Cross so that He could absorb the wrath of God for us. “It is finished” (John 19:30).

By His death, He defeated death. Jesus is our final Champion. We are no longer slaves to sin; He has undone the power of Satan. Where Adam fell and failed, Jesus redeemed it. He took it back and holds the final victory.

The Gospel in Genesis: The Life of Joseph

Healed to Walk With a New Identity

Summer 2019  Sexual abuse has reached epidemic levels and our churches are not immune. Most survivors carry a yoke of shame and guilt. As ministry leaders, we must be equipped … Continue reading

Brody Holloway : Summer 2018 : Psalm 139 : Tuesday AM Psalm 139 highlights the characteristics that we know to be true about God. Brody defines the Lord’s omniscience, omnipresence, … Continue reading