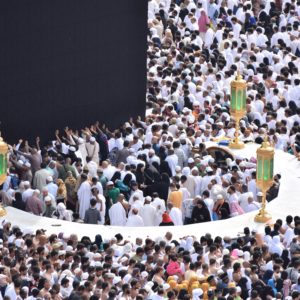 The Pilgrimage to Mecca (hajj)

Every Muslim with the financial and physical ability to travel is required to take at least one trip to the Islamic holy city of Mecca (in present-day Saudi Arabia). The Cave of Hira, where Muslims believe that Muhammad received a new revelation from Allah, is located here.

The hajj to Mecca is considered the greatest ritual of Islam. Millions of Muslims pour into Mecca during the first ten days of the month of Dhu al-Hijjah. The city and stone are both mysterious because no non-Muslims are permitted to enter the city. If you want to learn more about the details of Islamic holy sites, read Ralph Adair’s article: Holy Ground: The Importance of Mosques, Mecca, and Medina for Muslims

Mecca is lauded to be one of the greatest accomplishments in the world because of its ability to join together so many people from around the world. Ironically, there are now too many Muslims in the world to physically fit in the city of Mecca. The pilgrimage becomes a difficulty in the area of logistics for many Muslims.

The Kaaba, a cubical structure, is located in the center of the Haram Mosque. The Kaaba is at the center of a Muslim’s pilgrimage to Mecca in every way. Muslims believe it is a house Abraham and Ishmael built for Allah. Worshipers face its direction when they pray and one of the greatest spiritual events for any Muslim is to be able to touch or kiss the black stone.

“The holiest of all Islamic sites is the Kaaba, a cube-shaped building covered in black cloth located at the center of the Al-Haram Mosque. Muslims believe that, according to the Qur’an (2:127; 22:26; 3:96), the Kaaba was built by Abraham and his eldest son Ishmael for the purpose of calling the people of Arabia to make a pilgrimage to the Kaaba for worship.”

What Does the Bible Teach?

There is no similar pilgrimage that exits in Christianity because our faith is based upon the Word of God and the Truth of God. Muslims place immense importance on the historic acts of Allah, but our God has given us all the revelation we need in His Word (the Bible). Likewise, we have Scripture that is more than stories or mere religious instruction. “The Word of God is living and active” (Hebrews 4:12). And, more than that, we believe the Word became flesh in the person of Jesus Christ — Son of Man and Son of God (John 1).

God doesn’t need a Kaaba, mosque, or even a month of the year to meet with His people. He is the Creator and Sustainer of all. The Holy Spirit now dwells in the heart of every Christian. The child of God has no reason to visit Jerusalem, Mecca, or anywhere else to earn salvation or find a closer connection to the Heavenly Father. Jesus is the Messiah that God the Father promised long ago to the Israelites (and Gentiles). Christ’s atonement on the cross paved the way for the Spirit of God to enter the heart of every man, woman, and child who turns to Jesus (Ezekiel 36:26-27). We couldn’t go to God, so He came to us.

Throughout the Bible, God makes it clear that His ultimate dwelling place will be with mankind (Revelation 21:1-4). However, it is the Lord who sets the timeline, boundaries, and steps for how that is possible. He alone enables it. We are sinful, created humans that have rejected God in the most foundational sense (Genesis 3). Mankind was kicked out of the Garden of Eden, but God didn’t leave us to our own devices. He chased down mankind with a love that is far beyond any false deity (John 15:13). Jesus Christ left the throne of Heaven to come down as a humble baby. He lived a sinless life and died our death to pay the punishment for sin that we were too weak to bear (Colossians 2:8-15). And then, He rose again to conquer death forever.

“I tell you, something greater than the temple is here. And if you had known what this means, ‘I desire mercy, and not sacrifice,’ you would not have condemned the guiltless. For the Son of Man is lord of the Sabbath.” – Jesus (Matthew 12:6-8)

When Christ died, the curtain was torn in the temple in Jerusalem. Jesus didn’t abolish the law, but rather fulfilled it in the most complete way. Jesus is the final prophet, priest, and king—the very Son of God. He is Immanuel, “God with us” (Isaiah 7:14; Matthew 1:23).

“I saw in the night visions, and behold, with the clouds of heaven there came one like a son of man, and he came to the Ancient of Days and was presented before him. And to him was given dominion and glory and a kingdom, that all peoples, nations, and languages should serve him; his dominion is an everlasting dominion, which shall not pass away, and his kingdom one that shall not be destroyed.” – Daniel 7:13-14

“The God who made the world and everything in it, being Lord of heaven and earth, does not live in temples made by man, nor is he served by human hands, as though he needed anything, since he himself gives to all mankind life and breath and everything.” – Acts 17:24–25

Give me a deep burden to see those lost in the lies and traps of Islam to see the light of Jesus, and respond in faith. Root out anything in my heart that is anything less than an unwavering trust in the Gospel message. Give me a sacrificial love for those not yet in the family of Jesus. May your glory overwhelm me so magnificently that the message of Jesus comes out in every friendship you provide. Out of love, give me boldness to call the lost to repent and rest their faith in Christ Jesus alone.

“Muslims believe partaking in the hajj provides the forgiveness of sin. So Christians, via a discussion about the hajj, can share with their Muslim friend that Christ taught that forgiveness of sin comes from faith in his death and resurrection rather than from the completion of good works or religious rituals. Understanding Islamic holy sites and the rituals that take place there can help Christians draw important contrasts between Islam and Christianity—contrasts that need to be clearly recognized so the Gospel can be made clear.”

Teaching a Muslim the futility of traveling on a pilgrimage to Mecca doesn’t do much in the way of convincing someone to leave Islam. However, it helps to have a working knowledge and respect for Muslims and their belief in Islam. Asking a Muslim if they’ve ever traveled to Mecca or what mosque they worship at can open the doors for spiritual conversations and new friendship. Evangelism always begins with building a relationship that shows the genuine love we have for the other person. We must always show, and remember, that every person is created in the image of God. Every Muslim is an image-bearer of God, created for His glory.

The story of Jesus meeting the Samaritan woman at the well is a wonderful example for us to follow. Read and study it enough to share in summary form with a Muslim who is open to learning a new story about Jesus. The woman was a half-breed Jew who knew a little of the Jewish law but was downtrodden by her own inability to keep it. Notice the love, patience, and grace that Jesus carries the conversation with. He points out her sin, but only for the sake of encouraging her to trust Him as the water of life.

From Eden to the New Jerusalem (book) – T. Desmond Alexander

This story is from a former missionary that served as a teacher to Muslim students in the Middle East. The Taliban eventually pushed out all American-based schools in the area … Continue reading

30 Days of Fasting During Ramadan (Pillar 4)

Ramadan Fasting (sawm) The month of Ramadan commemorates the time when the Qur’an was handed down to Muhammad, and the Qur’an directs all healthy adults to participate. During the ninth … Continue reading