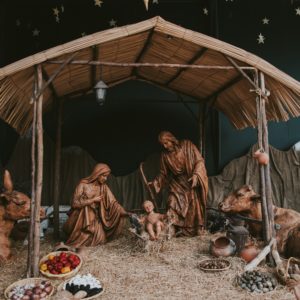 “And his father Zechariah was filled with the Holy Spirit and prophesied, saying,

‘Blessed be the Lord God of Israel,
for he has visited and redeemed his people
and has raised up a horn of salvation for us
in the house of his servant David,
as he spoke by the mouth of his holy prophets from of old,
that we should be saved from our enemies
and from the hand of all who hate us;
to show the mercy promised to our fathers
and to remember his holy covenant,
the oath that he swore to our father Abraham, to grant us
that we, being delivered from the hand of our enemies,
might serve him without fear,
in holiness and righteousness before him all our days.
And you, child, will be called the prophet of the Most High;
for you will go before the Lord to prepare his ways,
to give knowledge of salvation to his people
in the forgiveness of their sins,
because of the tender mercy of our God,
whereby the sunrise shall visit us from on high
to give light to those who sit in darkness and in the shadow of death,
to guide our feet into the way of peace.’

And the child grew and became strong in spirit, and he was in the wilderness until the day of his public appearance to Israel.” (Luke 1:67–80)

Zechariah’s prophecy (v. 67-75) is one long sentence. “It is often called the ‘Benedictus,’ from its first word in the Latin Vulgate” (ESV Study Bible). His prophecy begins with the same word, “blessing”, that Mary’s song did, just like many Old Testament psalms and prophecies (1 Kings 1:48; 1 Chronicles 29:10; Ezra 7:27; Psalm 41:13; Psalm 72:18; Psalm 106:48). Zechariah was intricately aware of the words he chose. He launched into a plethora of reasons the Lord is worthy of honor and praise.

The “God of Israel…has visited and redeemed His people.” This name, “God of Israel,” is used in both the Old and New Testaments (Isaiah 29:23; Matthew 15:31; Acts 13:17). God Himself had come. Jesus was no mere slave, servant, or messenger. He is God the Son—God in the flesh. He came from the line of David and He was spoken of by the prophets of God. Jesus was both servant and prophet, but that is not all. He is the Savior and Redeemer promised in 2 Samuel 22:3 and Psalm 18:2.

“The LORD is my rock and my fortress and my deliverer,
my God, my rock, in whom I take refuge,
my shield, and the horn of my salvation, my stronghold.” (Psalm 18:2)

Zechariah ties Jesus’ coming to both David’s line and the Abrahamic Covenant: “holy covenant, the oath that he swore to our father Abraham” (Luke 1:72-73). Zechariah brings clarity to Christ’s messianic Advent that many others missed. Christ’s fulfillment of His covenant stretches far beyond mere earthly kingdoms. There was more at stake than conquering pagan armies and achieving world peace. The Lord desired that His people “might serve him without fear,” empowered by grace rather than the worldly fear that typified false gods (Luke 1:74). Christ came to conquer the enemies of pride, self, Satan, and sin. His purpose was to make His people holy and righteous (Luke 1:75; Jeremiah 32:39; Matthew 28:20). The Lord “has visited and redeemed His people!”

“Fear seized them all, and they glorified God, saying, ‘A great prophet has arisen among us!’ and ‘God has visited his people!'” (Luke 7:16)

Lord Jesus, thank you for proving yourself powerful over the enemies in my heart. You alone are capable of conquering the power of sin and temptation. You alone can change the momentum of generational brokenness. You alone, by your grace, can make me holy and righteous.

Advent: The Birth of Jesus Christ

Day 24 Personal Study “Now the birth of Jesus Christ took place in this way. When his mother Mary had been betrothed to Joseph, before they came together she was … Continue reading

Advent: The Birth of John the Baptist

Day 22 Personal Study “Now the time came for Elizabeth to give birth, and she bore a son. And her neighbors and relatives heard that the Lord had shown great … Continue reading