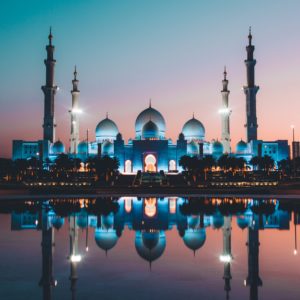 What do Muslims believe? (Intro to Islam)

What do Muslims believe?

Islam, like Christianity, finds its roots in Abraham of the Old Testament and is also a monotheistic religion. However, that is where the similarities end. Much of the foundational beliefs of the Islamic faith are intentionally counter-Christian and definitely counter-Gospel.

“And he made from one man every nation of mankind to live on all the face of the earth, having determined allotted periods and the boundaries of their dwelling place, that they should seek God, and perhaps feel their way toward him and find him. Yet he is actually not far from each one of us…” (Acts 17:26–27)

Paul spoke these words to the Greeks in Athens during the first century during his speech at the Areopagus. In the same way, Muslims are not far from God —  because Genesis tells us that every human is created in His image. He created us by the word of His power, and He sustains the very breath that fills our lungs.

Islam is thoroughly a monotheistic religion.

Muslims believe that Allah is the only one worthy of worship and that he is separate and distinct from creation. Most of this sounds great and not too far from the God of the Bible, except when it comes to how Allah is to be worshipped and how Allah teaches people to follow him. According to C. Fyne Nsofor in Islam and North America, “The primary concern of Islam…is God’s will, not his nature or character. The Christian faith emphasizes that God’s will actually reflect God’s character.” Thus, Muslims are most focused on obedience to Allah’s will, rather than “obeying God because one knows and worships Him” (Islam and North America, Kindle 983-996).

The shahada (or creed) is the confession of faith recited by Muslims in the Arabic tongue. It is technically the only requirement to become a Muslim:

“I testify that there is no god but Allah, and Muhammad is the messenger of Allah.”

What do Muslims believe about sin and salvation?

There is very little tension between the justice of God and the mercy of God in the Muslim faith. Muslims teach and feel a high degree of personal responsibility to personal sin, so it seems preposterous to think that Adam and Eve’s sin placed some sort of curse on the hearts of mankind. Speaking to Muslims about justice and the penalty of their sin, especially any guilt that was received from Adam, is completely confusing to their worldview.

“Islam teaches that humans are born spiritually neutral, perfectly capable of obeying the requirements of God completely, and that they remain this way even after they have personally sinned.”

“Without a doctrine of original sin, Islam also denies the doctrine of Christ’s atoning death on the Cross.”

Christians, however, trust Paul’s words in Romans 5:12-21 that all creation was put under a curse, resulting from Adam’s sin, and that Jesus Christ was the only one who could pay our sin debt and atone for the curse of our sin. Christ did everything that Adam didn’t. He, the very Son of God, walked a perfectly righteous life and intentionally presented Himself upon the Cross of Calvary as the perfect Lamb of God who took our place.

Romans 3:23 teaches that God’s standard is 100% holiness and righteousness because He is righteous. So, Jesus is our only hope for holiness! The Muslim understanding of sin only allows them to view the world with a lens of works-based righteousness—which the Bible reminds us is filthy rags. By the merit of Jesus, the God of Christianity stands ready to offer grace and forgiveness to all who repent and follow Him in faith.

“For the wages of sin is death, but the free gift of God is eternal life in Christ Jesus our Lord.” (Romans 6:23)

As the shahada says, Muslims believe that Muhammed is the prophet of Allah. He is set apart and distinguished as the prophet to whom Allah chose to reveal the Qur’an. Thus, he is considered the last and greatest of Allah’s prophets. If you want to learn more about the history of Islam, check out The Story and Spread of Islam article from the International Mission Board (IMB).

Sunni and Shi’a are the two primary denominations of Islam. There was a major split after Muhammad’s death in 632 A.D., based on who should succeed him as the leader of Islam. Roughly 85% of Muslims in the world are Sunni Muslims, but Shi’a Islam holds the majority in Iraq and Iran.

The Qur’an is Islam’s holy book, which records visions that Allah supposedly gave Muhammed over the course of several years.

Muslims consider it to be the infallible words of Allah and unchanged over time. Moreover, it must only be read in Arabic to prevent any change to the original meaning. Ironically, it was written 600 years after the Bible and actually assumes that some biblical knowledge is already present in the reader. Several passages speak directly against inaccurate understandings of Christian doctrines like the Trinitarian nature of God and the promised Messiah.

The consistency, what little there is, ends at the Qur’an.

Numerous more books, the hadith, were written to help explain what Allah meant in the Qur’an and there is great discrepancy across Islam about which are authoritative and should be accepted. Depending on what mosque they frequent, Muslims have a great variance in their understanding on what the teachings of the Qur’an mean.

Do Muslims believe in Jesus?

Muslims believe Jesus was a prophet of Allah, just like Abraham and others.

They also believe that He was born of a virgin and lived a very moral life. But, they don’t believe that He is the Son of God or the Messiah who was promised in the Old Testament. A true Muslim could never believe anyone else besides Allah is God. To associate anything or anyone else to the level of Allah is to commit shirk — the unforgivable sin.

Most Muslims believe that Jesus was not crucified but rather taken up into Heaven right before His death.

Some Islamic teachers suggest Judas was placed on the cross to look like Jesus and take His place in death. This completely transforms their view of man’s salvation. If Jesus wasn’t the perfect Son of God, the second person of the Trinity (three in one), then He could never atone for the sins of man. He was simply a good prophet worthy of emulating.

“For our sake he made him to be sin who knew no sin, so that in him we might become the righteousness of God.” (2 Corinthians 5:21)

At the end of the day, every religion outside of Christianity will counter two key teachings of the Bible. This holds true for Islam, Mormonism, Hinduism, Buddhism, cults, and everything else in between.

First, they make Jesus less than He is.

Second, they depend on good works for righteousness.

What do Muslims believe about Christianity?

We, the average Western Christian, largely know very little about what American Muslims believe and how it affects their daily life. However, Muslims also hold many incorrect beliefs about Christianity. J.D. Greear’s article is worth reading over.

Here are his three primary points:

Muslims believe Christians are heretics of the worst kind.

Against what the Qur’an teaches, we have raised Jesus to the level of holiness and separate righteousness as God. The Islamic faith teaches this is the unforgivable sin, worse than rape, murder, or any number of other heinous sins. They will have the utmost respect for Jesus and His teachings, but believe that Jesus Himself claimed to not be God.

Stemming out from the lack of atonement in Christ, grace and peace with God seem like terrible excuses for Christians to gratify their own sinful desires. Our joy that is grounded from a personal relationship with Jesus Christ has been twisted by Satan and appears to the Muslim as a simple lack of obedience. As Zane Pratt mentions, they truly believe that a person is capable of remaining completely sinless and obeying Allah in every way.

“As disciples, our calling is one of discipleship, which is always a life-on-life venture. God has called us to disciple all nations (panta ta ethne; Matthew 28:19); hence we are obligated to befriend Muslims, build bridges of understanding, and testify––in word and deed––to the truth and comprehensiveness of the Gospel message.”

What will it take to reach Muslims with the Gospel?

“Many obstacles stand in the way of Muslims coming to faith in Jesus—theological confusion and the cost of conversion being two of the most daunting. And of course the most common reason why Muslims are not coming to Christ is that most have simply never heard the gospel.”

Muslims must hear and understand an accurate, biblical picture of Jesus Christ.

Many Muslim-background believers (MBBs) point out that very few people ever leave Islam, but many do turn to follow Jesus. We must give them Jesus! And, we must live out the biblical picture of the body of Christ on a daily basis. Don’t make it your ambition to study everything that is wrong with Islam.

Instead, make it your goal to know Christ so deeply that His actions and teachings in Scripture come out in your daily conversations.

“They are lost exactly like any other non-Christian, neither more nor less than anyone else. Furthermore, Muslims do come to faith in Jesus Christ. It usually takes time, and extended exposure to the Word of God and the lives of Christians, but more Muslims are coming to faith today than at any point in history.”

The Story and Spread of Islam – IMB

Do You Know the Basics of Islam? – IMB

How To Love And Respect Muslims By Learning Their Culture

The Bible teaches us that it’s possible to love and respect a Muslim friend and respect their beliefs—without forsaking the Truth of Christ. Christ is our guide as we learn … Continue reading

Ramadan Guide Intro: How to Love and Engage Muslims with the Gospel

April 2 starts the 2022 Ramadan month, the annual 30 days of fasting for Muslims around the world. This month, 1.9 billion men, women, and children started their day worshipping … Continue reading