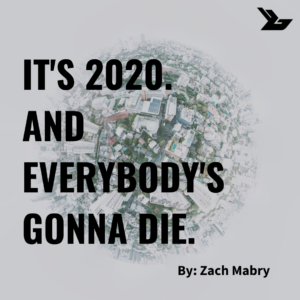 These are 2 true sentences. Yes, I did string them together so that I could cause a bit of a stir, but let’s think about it. Everyone in the world has been talking about 2020 as if this is the absolute worst time in history that you could ever be living. We are constantly hearing about some type of catastrophe, whether it be fire, flood, or storm and we find ourselves answering something like, “yeah, well it’s 2020…”.

In addition to this we are facing a worldwide panic caused by COVID-19 that some experts tell us have claimed upwards of 190,000 American lives. (We don’t have to debate whether those people have died with the virus or from the virus the fact is we know they have died.) And many people are blown away by how high this number is. But why is that? I think that much of it has to do with the fact that we (as Americans) think that Americans are invincible and it is unacceptable that something could possibly cause that many American deaths. Also, it seems to me that we are woefully ignorant of the number of people who actually die every day (much less, every year) in the United States.

Do you know how many Americans have died? All of them. Every American that is not alive right now has died. To put it statistically, the mortality rate for Americans is 100%. We are all gonna die. Now, does that mean that any human death is insignificant? Absolutely not. We mourn the loss of parents, grandparents, siblings, children, and friends. Moreover, we believe that every human being has innate value as an eternal soul that has been created in the image of God. In fact, the reality that every human being is going to die makes each one of our lives more valuable. We have a very limited amount of time and we need to use it wisely to have the most long-lasting, even eternal significance.

Now is a really good time for some perspective. According to the CDC (which, I know is beginning to sound exactly like, “two guys walk into a bar”), there have been 2,022,937 deaths in America this year. Whoa… that’s crazy. Over 2 million Americans have died so far this year and if we are going to match the number of deaths in America from 2019 we still have nearly 800,000 to come. What a sobering reality. Let’s take a quick time out and realize that there’s a genuine possibility that 3 million Americans could die this year. That is crazy. But do you want to zoom out even further? That is still less than 1% of the country. Seems like way more right? I think we’re so overwhelmed by these COVID-19 numbers because we’ve never fully thought through the reality of how many people die each year and that every one of us is going to die.

We should read our history books more

To the point that this is the worst time in history to live, we really need to have a better understanding of history. Be careful that you don’t get drawn into calling Covid-19 a “plague”. When we think of the bubonic plague, we need to realize that our numbers are a bit hazy but somewhere between 30 and 50 percent of Europe died…. oh my goodness… That’s insane. That means that if you were hanging out with your 2 best friends only one of them would make it through. Dang. That’s a plague. And that’s way worse than what we are experiencing now. In fact, if it’s in your history book, it’s probably worse than what’s happening today. World War II. World War I. The Great Depression. The Civil War.

But what should I be outraged about?

People have died this year from all sorts of things: diseases, accidents, and natural disasters (to name just a few). But let’s be completely honest, for most of these situations their deaths were unintentional, involving no foul play. And for many, their deaths were unavoidable. There was no negligence involved, they just died. We should mourn their passing, but we really can’t place the blame on anyone specifically for their deaths.

There is however a very sobering demographic of deaths that we can do something about. I’m talking about a group of Americans that were targeted and killed on purpose. And it’s no small number. As of right now in America, the best estimate is that we have aborted over 627,000 little, tiny Americans before they even had a chance to take a breath. That is something that should outrage us and cause us to take action. If we really care about human death and about preventing unnecessary American deaths then we need to be concerned about all of them: from conception to natural death. If we are going to be outraged by the increasing number of deaths caused by a disease that we have no control over then how much more do we need to be outraged by a practice that we have 100% control over? Every one of these little, image-bearing, eternal souls was snuffed out on purpose, intentionally.

So act. Write your lawmakers. Vote for people that will protect the next generation of Americans. Talk about this with your coworkers. Bring awareness to these numbers. Don’t sit back silently while we kill our future.

Here’s a good place to start.

So, why should you care about what apps are on your phone? Our mission is to equip students to fight for godliness using every tool available to them. Believe it … Continue reading

3 Books that Fight for Godly Womanhood

As we prepare for the upcoming Respond Women’s Retreat, we wanted to recommend a few resources that are centered on biblical womanhood. These books will equip you to grow in … Continue reading

Recommended Resources For Your Staff Application

Working on your summer staff application is a lot of fun, but it can get a little overwhelming. Here’s a list of some helpful resources for you as you complete … Continue reading