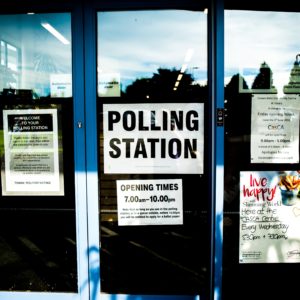 My Hope Is Not In The Election

I was recently at a conference where a prominent Christian leader was asked to give his opinion on what good could come from a “Biden America” and he responded by saying that he didn’t really see any good news. Now, don’t get me wrong, I see where he is coming from, especially in light of the fact that Biden has been very clear on his desire to restrict religious freedom and increase government-funded abortions, however, as Christians we need to be reminded that, “some trust in chariots, some trust in horses, but we trust in the name of the Lord our God” (Psalm 20).

In America, we have been so spoiled. We live in a country that has a form of government based largely on Christian principles where we have a government of self-rule. Not only that but in our founding documents we have made the statement, “that all men are created equal, that they are endowed by their Creator with certain unalienable Rights, that among these are Life, Liberty and the pursuit of Happiness.” Granted our history is replete with examples of how we haven’t consistently lived that out, but that is beside the point for now. The point is that we are spoiled. For some reason, we feel like we are entitled to have a perfectly consistent Christian as our president. Where in the world did this come from? And more than that, where did we get the notion that if we don’t get the president we think we deserve then something has gone wrong and God must have lost control? Now, that might be hyperbole, but that is the way, at least, we seem to be acting. But this kind of thinking has no place among Christians who have even the least bit of memory of church history. Let’s not forget that the governing authorities put Jesus and many of our church fathers to death.

Let’s go even farther back in time. Part of my personal devotions includes a Bible reading plan where I read through Old Testament once a year. This past week I just happened to be reading through the book of Jeremiah and came across this passage:

“It is I who by my great power and my outstretched arm have made the earth, with the men and animals that are on the earth, and I give it to whomever it seems right to me.” Jeremiah 27:5

Okay, so for a bit of context: Jeremiah is prophesying to God’s chosen people living in the “promised land” and is telling them that God is giving their land, their inheritance, to King Nebuchadnezzar. What?! How is this possible? What must those Israelites have been thinking? Well, when we follow the account we see that they have two reactions, each with its own consequences. One group of people rebel against this evil, pagan king and fight for their homeland. On the surface this seems to be the proper response, after all, this land is the fulfillment of the covenant God made with Abraham. The other group quietly submits and goes into captivity to Babylon. On the surface, this seems like a rejection of God’s promises and a cowardly submission. So which group is actually doing the right thing?

Before we answer that, let’s look at the context. God’s people have rebelled against Him. They have worshipped false gods and abandoned the worship of the one, true, God and God is punishing them for their rebellion and idolatry. His will for them is that they be displaced from their homeland because of their disobedience. But how is this going to happen? Is he going to send His angels to come down and make things right? Nope, he’s sending a human king named Nebuchadnezzar, the Bible even calls him God’s “servant” (the same word used for Moses). It is in light of this that we see that the ones who quietly gave in to the pagan, invading army and submit to displacement are the ones who are following God’s will.

Obviously, we are not living in a parallel situation to the Jews in the sixth century before Christ, but we are living in the same world, governed by the same all-knowing, all-powerful, meticulously sovereign God and we need to live in light of that. We have to remember that God is still on His throne, no matter what happens tomorrow (and the next week as the final results are tallied).

Is there good news in a “Biden America”? Heck yes! Jesus is still in the business of bringing people from death to eternal life through the power of the Gospel. This is the unchanging Good News!

If you put your trust in men or governments then you need to be freaking out big time. Neither one of these guys running for president is worth putting your faith in. Neither one of them can save you. Neither one of them can save our country. They are both, “mists that will appear for a little while and then vanish”. Do you remember the election of 1888? Pretty crazy right? No, of course you don’t remember. In fact, I just threw that you out at random to throw you off. The point is that for Benjamin Harrison and Grover Cleveland (I wikiapediad it) it was the biggest election of their lives and now it is a footnote in history.

Yeah, I said it, and I’ll repeat it: America is not God’s chosen nation.

Do you believe this? Don’t get me wrong, I love America. I am so thankful that I get to live in a country where we can worship God freely in the open. I’m glad my kids aren’t scared to death to go in public for fear of being persecuted. But if all this was taken away it shouldn’t compromise my faith in God. If current events take a turn for the worse and America becomes a communist state, or if Canada, who has been playing it cool for decades, decides to annex us in an all-out war, I should still have an unshakable faith in God. And let’s remember, no matter what happens this week, whoever gets elected, it won’t be as bad as it has been in the past. It won’t be as bad as Nero. It won’t be as bad Diocletian. They are not all of a sudden going to break out the lions and colosseums.

All Glory Be to Christ

Let’s not be distracted by our mission. Our Lord gave us a command to make disciples. This needs to be our ambition, regardless of the political context we find ourselves in. Do we need to be concerned with what is happening? Sure. Should be politically active? Of course. If we can be a part of creating an environment that is conducive to the proclamation of the Gospel then we should be doing that. If we can be a part of creating awareness and voting so that fewer eternal, image-bearers of God are slaughtered out of convenience then we should do something about it. Just because the nation we live in isn’t the Kingdom of God doesn’t mean we should be terrible citizens. In fact, the teaching of both Testaments is consistent that we need to live as good citizens of the nations in which we live.

In Jeremiah God tells His people that they are going into exile for 70 years and look at the council he gives them.

Build houses and live in them; plant gardens and eat their produce. Take wives and have sons and daughters; take wives for your sons, and give your daughters in marriage, that they may bear sons and daughters; multiply there, and do not decrease. But seek the welfare of the city where I have sent you into exile, and pray to the LORD on its behalf, for in its welfare you will find your welfare. Jeremiah 29:5-7 See what’s happening? They are being called to be good citizens, to seek the welfare of that nation. If they were told to do that in Babylon, how much more do we need to do that today?

And we see similar teachings in the New Testament. Look at what Peter has to say to us (and remember that the sitting emperor at the time was Nero).

“Be subject for the Lord’s sake to every human institution, whether it be to the emperor as supreme, or to governors as sent by Him to punish those who do evil and to praise those who do good. For this is the will of God, that by doing good you should put to silence the ignorance of foolish people. Live as people who are free, not using your freedom as a cover-up for evil, but living as servants of God. Honor everyone. Love the brotherhood. Fear God. Honor the emperor.” – 1 Peter 2:13-17

You’ve been given a blessing to live in America right now, so be a good American. Obey the law. Get out and vote. Write your representatives. But remember that no matter what happens our ultimate allegiance is to God. First and foremost we are God’s children living in God’s world. He is working things out according to His will and our faith in Him should not be shaken.

Truth bombs These are 2 true sentences. Yes, I did string them together so that I could cause a bit of a stir, but let’s think about it. Everyone in … Continue reading

Why Passion in Ministry Isn’t Enough

By Greg Mathias It is not uncommon for me to sit across the table from a friend, colleague, or student and hear stories of burnout, disillusionment, and just plain weariness … Continue reading