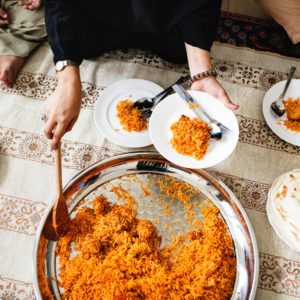 Ramadan Stories: Hospitality in the Middle East, Africa, and Tennessee

Jim and Sarah are friends of Snowbird in Tennessee. They love Jesus, raise their kids in the truth of the Gospel, serve their church, love their neighbors, and actively engage Muslims with the Gospel on a regular basis.

Hospitality and the Christmas story.

Sarah and I have built a great relationship with a Moroccan family over the last several years. Sarah was initially introduced to this family through a friend. She was quick to invite them to our home for a meal and over the last several years that hospitality has been reciprocated back and forth many times. Their kids are friends with ours and we often interact with the parents at different times. We invite them to join us around holidays, and they seemed interested in coming. A year ago their family of 5 all came for a Christmas meal. Discussion around the dinner table always lasts for hours, and we were able to share the Christmas story with them. I believe they expected it.

The sharing of hospitality over the years has led to so many natural conversations about our faith. Often, just asking how they are doing and telling them we are praying for them has led to opportunities to share what the Lord puts on our hearts for them. They have expressed that we are like their American family. Over a year ago they discovered that we were going to be in Southern Spain just a ferry ride away from northern Morocco, where their family lives, and they insisted we visit them. It was during Ramadan but they insisted that we break fast with them. It was such a blessing to visit the extended family in Morocco, break fast with them, and spend all night walking their streets and sharing life. At one point, the family in Tennessee video called to Morocco so we could all talk together. This family has not only heard the Gospel in multiple ways but has also grown to invite it. We are praying that The Lord will reveal Himself very soon to them.

Another Muslim family that we have grown close to is a local Turkish Family. Their father works at a local pharmaceutical company and they first came to our home through a college student that is a friend of our family. Though the college student didn’t have a dining room of her own to show hospitality she told the Turkish family she had met at an event that she had an adoptive family in town that would love to have them in their home. With much insisting, she convinced them to come to our house for dinner. They, with their two young daughters, stayed in our home for several hours. We were the first American home they had been in.

They reciprocated the offer of hospitality and invited us into their home. Over the last couple of years, they have become really close friends. They spend most holidays with us and the father seems genuinely interested in the Christian holidays, and what they mean to us. They are never resistant when we share the important aspects of our faith and Jesus. They have seen us pray in our home and over needs. I often talk with my Turkish friend about important decisions that Sarah and I are seeking the Lord about, and how we feel the Lord is speaking to us. He is always fascinated by how we describe our personal relationship with God. Once, after sharing with him how the Lord was leading Sarah and me, he just looked at me and said, “You are truly a blessed family.” I could see that the idea of God leading us so personally was something he truly wanted in his life. This family has also become so close to us that they also invited us to visit their family in Turkey this last Spring while on our way to North Africa. We were able to stay overnight in Istanbul and spent the evening visiting their Turkish family and sharing in their hospitality. It was a beautiful opportunity to share life with them and feel even more trusted and close to them because of it.

Loving the fatherless and gaining a daughter from Somalia — in Tennessee.

We regularly talk on hospitality to foreigners in churches, and a pastor called a couple of years ago us because a young Somali single mom had walked into his church looking for food. After helping her with some food, he called us and gave us her number. Sarah called right away to invite her to come and have dinner with us.  At first, she was a little suspicious of us. She kept saying to Sarah that she couldn’t come to our home because she was a Muslim and had a small boy and furthermore had a boyfriend from Haiti who was also a Muslim. We continued to insist that she come and that her boyfriend come as well. When they came to our home they were nervous. They were young and both seemed a little broken. It turns out that she had run away from her Somali family and community in Nashville because she had been abused. Her Haitian boyfriend had also grown up in abuse and somehow the two of them were helping each other manage life and abandonment.

Room for the homeless

After they warmed up to us however, they didn’t want to leave. They stayed for several hours and kept remarking at how much joy we had in our family and how happy our kids seemed. They didn’t have a car so I drove them home that evening. The young Haitian man said with deep seriousness, “I wish you were my Dad!” The Somali girl asked why he said that and he simply said, “because your home has smooch joy in it.” Over the following weeks, we saw them weekly and had many opportunities to share our faith with them and point to the joy found in Christ. We also discovered that they were using drugs and that the young man was dealing drugs. Soon he and his brother had to leave town because of it and the young Somali mom and her 3-year-old son were homeless. We convinced her to stay with us and for the next year or so the Lord pursued her heavily.

There were layers of fear and brokenness attached to her Muslim identity and the abuses of her childhood. Over many months, however, she declared that she wanted to become a Christian. She said that she wanted her child to grow up knowing Jesus. A few months later, Sarah baptized her. She became a daughter to us. She calls us Mamma and Papa. She recently moved to a Somali community in Minneapolis where she got married. She proudly proclaims her Christianity and has introduced us to her new Somali family there. Last fall, we were able to visit Minneapolis and receive hospitality from Somali families who had never had an American in their home before. Her new husband is asking many questions about Christianity and is now involved in a weekly Bible study with some friends in their neighborhood. We are so grateful for this young lady whom the Lord has knit into our family.

Ramadan: Friendship, Language Learning, and the Gospel in North Africa

By Greg Helms My last day in this sandy, sub-Saharan, African city had arrived bringing a month-short visit with long-admired missionary friends to a close. My flight out was the … Continue reading

By Isaac Thomas* The night before Ramadan started, I went out to dinner with a few local men to grab burgers, fries, and some surprisingly good banana pudding. They were … Continue reading