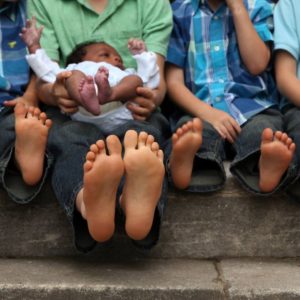 The Whisper of the Gospel in Adoption

I waved a reluctant goodbye, exhausted and emotionally spent, with tears streaming down my face. The grief of farewell was more than just a sense of loss. It was a profoundly life-changing whisper of an almighty God.

I didn’t give much thought toward adoption in those days.

In my seemingly endless single period, I often joked, nay threatened my own intent on adopting thirty Ethiopians if I wasn’t married by the time I was thirty. I am not even sure why I made that specific declaration, for kids and babies were not my thing. Truthfully, it was more of a love of self that sat on that maternal throne.

Now though, Shawn and I had two great kids, both of which we struggled to bring into this world. In God’s divine providence, He chose to allow the babies to be extra healthy while I was not. He refined me deeply at that time. We had tossed around the word adoption as a means to complete our family instead of me carrying any more children, but I wasn’t really there.

Adoption had always seemed far off. Other people did that. I knew one adopted girl at my home church and she was a “handful.” No one talked about adoption much as an option for regular families.

Yet when we became a part of the body of Christ at Red Oak where the “regular” was challenged, this unfamiliarity changed dramatically. The American dreams, thoughts, and life were held up to a perpetual Gospel mirror and were shown to be lacking. Where much is given, much is required, and I knew this at my core.

In the course of our lives at Snowbird, another summer began. This one was different. We had a friend who taught in a school in Phoenix, Arizona, who had asked one of her students to spend the summer with her at Snowbird Outfitters. (side note – This teacher gave her summers for a while to serve on staff at camp.) The previous summer, this student had come for a few life-changing weeks, where she excitedly received the Gospel words she heard and began her short discipleship period before having to return home. We were collectively excited to have “Coley” back for the entire summer! In our minds, familiarity might cause her just to want to hang out with us and not get the full summer experience, so in our best way of thinking over her time in the mountains, it was decided for her to live and work at camp.

The Lord, however, thinks complex things to our modest thoughts.

She came to me one day soon after arriving and inquired if I had a towel she could use… oh, and some shampoo too if it wouldn’t be a problem. Mind you; this was a ten-week stint she was pulling, far from home. In my quick investigation, I found, that her travel bag looked like a 13-year-old had thrown it together the night before — because she had. Her mother was unable to help or get her to the actual airport for one reason or another, and by God’s divine providence, she had managed to get her self on a plane, to Andrews, NC.

“Move her into your home.”

The voice was clear. With a beating heart of acknowledgment, I called Shawn. “She has to live with us,” I declared. He knows me pretty well and understands that this is not my first proclivity. Hospitality not being modeled for me in this way growing up. I don’t tend to jump to that conclusion right away. But again, the whisper was audible:

This child needed a family.

As we waved goodbye that hot August day, the stream of tears was not just over the hard summer we journeyed through. It was not all roses. Romantic periods wear off. She was a teenager, after all. I was a boy mom. I was fundamental at best with how to help or connect to her. Shawn is better at interpersonal. He connects quickly to the damaged and hurting where I shine at the structure and service aspects. I felt clunky in that process wanting to be the best for her and didn’t know how to do that. Yet we prayed it would be enough. So as she traveled down our road, back to her own life in Arizona, I realized at the moment what it felt like to love a child so deeply, who was not my own.

This was the second whisper.

Thus the seed of adoption was planted in my heart and in the heart of our family. It was no longer a faraway place, but somewhere close that we needed to be.

It would be two summers later before we put water on that seed by pursuing Life Choices of Memphis, TN. In the summer of 2012, I started and submitted our paperwork. The Lord is faithful through every aspect of the adoption process. I have come to realize that the adoption story is much like a birth story. While similar, they can differ dramatically. You can bet on two things:

In our case, we waited for three years. It was an emotional tumult. The wait always is. At times there were thoughts of “do we need another child? I don’t often enjoy the current ones I am raising! Are we cut out for this? Why would God give me another baby when I lose my headspace so often taking their childishness personal? I am not a great mom as it is. My bad seems to out-weigh my good.” I am glad my salvation is not based on my parenting.

Luckily, Shawn is a steady fellow, and we never had our moments on the same day. So we continued faithfully in the process of renewal, re-finger printing, and re-financing as we raised our funds.

One day in early February of 2015, a scared teenager walked into a ministry called Life Choices of Memphis, (that if I ever won the lottery, I would donate a large sum to). They seem to be an abortion clinic. This pregnancy is not desired. “Let’s end it,” she thinks as her doctor has told her it is a mass of tissue anyway.

But, in 2015, the law considered this a late-term procedure and not legal. Praise Almighty — my son would not be here today.

Life Choices counsels her, shares a picture of her child with her via ultrasound, and asks how they might help her to parent.

She cannot.
She is newly 15.
It’s too much.
She wants to finish school.
Her sister is pregnant too and that would be too much on all of the family.
What other choice does she have, she wants to know.

On April 3, our phone rings.

A little boy has been born. Would you and Shawn consider him? He is African American and the mama wants us to choose the family. You are the longest waiting family.

We are receiving our child to be providential default. How fitting. The Lord knew what both parties needed. We say “yes!”

I feel like a fish out of water. They say some words of poetry over us, and pray over us. We cry with the cradle care mama who has religiously kept perfect records of his three days of existence for whomever would be his family. This was her first placement too.

Then we leave in our car, with a baby, just like that.

So our adoption journey would seemingly be coming to a close in those moments, but in reality the journey is never over. Navigating his reality will be a life-long event. Helping him know who he is in Christ (first), and how he fits into this world (second), will be a day-by-day process for us.

For now, though we thank the Lord daily and we pray over his precious birth mama who has since graduated from high school and is attending college!

We pray over him to love the Lord his God with all his heart, mind, strength and soul and love his neighbor as himself. We are teaching him obedience, so that one day he may be obedient in all that God asks of him.

Small steps of obedience made way for him to be in our home. A teacher that obeyed the Great Commission in her own way, by investing personally in her students, a listen to the whisper of a voice that said move her in, an act of faith in sending in our application, a family that waited for years in simple obedience expecting God to work. I am overwhelmed when I look back over these past few years. There were countless steps in the story before receiving the phone call on April 3.

Your son has been born.

The whisper of the Gospel seeps out through adoption.

25 Bible Passages You Should Read This Christmas

All Scripture from Genesis to Revelation, points to Christ. Don’t miss that reality during the Christmas season. The Advent (coming) of Jesus is just as important as His crucifixion and … Continue reading

A Simple Explanation of Eternal Security (From Hebrews 3)

Listen to the complete sermon from SWO20 Summer Camp (by Spencer Davis) here: Can You Lose Your Salvation?

So, why should you care about what apps are on your phone? Our mission is to equip students to fight for godliness using every tool available to them. Believe it … Continue reading