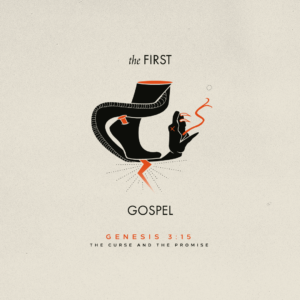 Advent 1: The Curse & The Promise

“The LORD God said to the serpent,
‘Because you have done this,
cursed are you above all livestock
and above all beasts of the field;
on your belly you shall go,
and dust you shall eat
all the days of your life.
I will put enmity between you and the woman,
and between your offspring and her offspring;
he shall bruise your head,
and you shall bruise his heel.'”

In the words of Maria from The Sound of Music, “Let’s start at the very beginning, a very good place to start…” It’s December 1st, and we are starting our journey through the Old Testament, which will culminate in the birth of Jesus, so why shouldn’t we start in the first book of the Bible? You might have read the above passage and thought, “That seems weird. Why would we start a season that focuses on the coming of Jesus with God cursing the serpent in the garden?” Great question. The answer is because this is where we see the very first glimpse into God’s rescue plan for humanity.

Theologians have dubbed this passage the proto-Evangelion, which is a fancy, Latiny way of saying, “the first Gospel.” The reason they have done this is because it contains a promise that God is going to send someone to crush the head of the serpent (which we all know is Satan). As you know, God gave Adam and Eve one command to follow — they could eat from any tree of the garden except for the one in the middle called “the tree of the knowledge of good and evil.” However, when they failed to keep this command, God disciplined them.

We see several consequences of this for mankind, like increased difficulty in working the land and increased pain in bearing children. Then we see that God cursed the serpent (Satan’s instrument in the garden) and then Satan himself. But even in this just punishment, we can see the grace of God. There are several ways we see this. First, God didn’t kill them immediately. They were told that they would “surely die” if they disobeyed, but God didn’t execute them on the spot. Instead, we see that they (and we) became mortal. Instead of living forever with God on Earth, we now have a ticking clock that will lead to our physical death. But secondly, God promised to provide a remedy for our sin. He promised that he was going to send someone that was going to crush Satan’s head.

There are two aspects of this passage that really stand out in significance. First, notice that God talks about “her offspring.” Isn’t it interesting that he doesn’t say “their offspring” referring to Adam and Eve, but instead it’s simply “her offspring?” This is interesting because it could be the first hint of the virgin birth of Christ.

Secondly, it’s a little confusing because it talks about bruising heels and heads. What should we make of this?

The significance here is not about the bruising but about the objects being bruised. This word for bruise is also translated “crush” in some versions and in Job 9:17. God was going to send someone who would be born of a woman (and maybe not with the help of a man), and he would be injured by Satan (see also the hint towards a “suffering servant”). He would have his heel crushed by the serpent. But this coming redeemer was going to crush the head of this serpent, of Satan himself.

So what should we be thinking about this first day of December as we are anticipating Christmas? We should marvel at God’s plan for our salvation. We need to step back and reflect on the fact that even though we have an all-powerful, just God who will not let sins go unpunished, he also takes it upon himself to deal eternally with our sin. At the very moment of our first sin, we can see that God had a plan to save us. From the beginning, we can see that God is not only wholly just; he is also wholly gracious. And not only that, but we also see his grace in letting us know (even just a little bit) about what he is up to in his plan to bring us back to a relationship with himself.

Let’s Talk About It:

Advent 2: Blessing To The Whole World

“Now the LORD said to Abram, “Go from your country and your kindred and your father’s house to the land that I will show you. And I will make … Continue reading