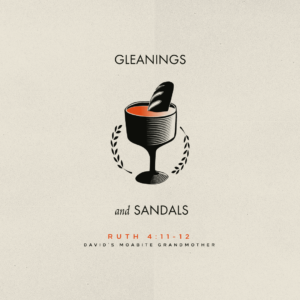 “Then all the people who were at the gate and the elders said, “We are witnesses. May the LORD make the woman, who is coming into your house, like Rachel and Leah, who together built up the house of Israel. May you act worthily in Ephrathah and be renowned in Bethlehem, and may your house be like the house of Perez, whom Tamar bore to Judah, because of the offspring that the LORD will give you by this young woman.”

If you haven’t picked up on this yet, our journey through the Old Testament on our way to Jesus often reads more like the plot to a soap opera than a religious text. This goes to show us that God uses all kinds of people from every type of background to bring about his plan for the world.

This episode in the drama of Scripture starts out very dark. I mean, no sooner do we get introduced to the main characters than they start dying off. There’s a man named Elimelech from Judah who moves to Moab because of a famine, and there he and his two sons die, leaving his wife Naomi with two daughters-in-law. One of them goes back to her family, and our story follows Naomi and Ruth as they go to live in the little town of Bethlehem.

As soon as they get settled in Bethlehem, Ruth gets to work. You see, God had already made a way for faithful Jews to take care of the poor, and Boaz was a faithful Jew. It just so happened that this takes place in the time of the harvest, and Ruth just so happened to stumble across Boaz’s field.

As was their custom, Boaz’s workmen would harvest the fields but would leave anything that fell to the ground for the poor to pick up for themselves. This is where Ruth comes in. She was busy all day picking up the leftovers when Boaz noticed her. He had already heard of the kindness she had shown to Naomi, and he wanted to help reward her, so he told his men to leave out even more for her. When Naomi hears about this, she realizes that Boaz is in a unique position to help because he is a close relative of theirs and could be their kinsman redeemer.

I realize that some of this might be confusing because it is talking about ancient Jewish traditions and customs, but the really crazy part is that these practices had been a part of the Jewish culture for generations, and now God is using them to bring about his plan of salvation through Jesus.

Then we come to the climax of the story. Boaz decides that he is going to redeem them, but he has to get past another relative who is first in line. This guy doesn’t want to ruin his own inheritance, so Boaz redeems them and hands over his sandal, which is kinda like a handshake. The deal is done.

Okay, this is a really cool story, but where does it fit into Christmas? First off, we get to see even more of how God had always been working toward fulfilling the promise he made in Genesis 3. God set up laws and customs for his people that were instrumental in bringing all of this together. Plus, let’s not let it go unnoticed that we have another woman from a Pagan culture brought into God’s people. Not only that, but she is also used to bring about the Messiah.

It’s in the last verse of Ruth that we really see the connection to Jesus. Ruth has a kid named Obed, who has a son named Jesse, who has a boy who would grow up to be King David. How amazing is that?! God uses this poor, Moabite widow to be the great-grandma of King David. So this year, when you are singing, “O Little Town of Bethlehem,” make sure to pause and remember that Bethlehem is also where there was another redeemer who showed kindness to a different outcast, a young woman.

Advent 13: Grace from Disgrace – The Wife of Uriah

“When your days are fulfilled and you lie down with your fathers, I will raise up your offspring after you, who shall come from your body, and I will establish … Continue reading

“… and Salmon the father of Boaz by Rahab,” Matthew 1:5 Don’t Forget the Land For the people of Israel, the most tangible part of God’s covenant with them was … Continue reading