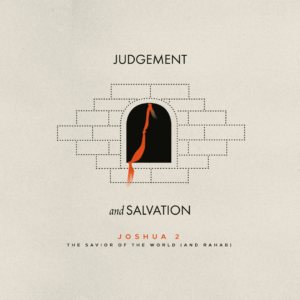 “… and Salmon the father of Boaz by Rahab,”

For the people of Israel, the most tangible part of God’s covenant with them was that he would give them the Promised Land. It’s really cool for us to look back on how all of this played out because we usually don’t think much of the land. After all, we don’t live in Israel, and most of us don’t ever plan to. But for the Jewish people, this meant everything to them. In reality, if we don’t keep the promise of the land in mind, we will miss out on a lot of what the Old Testament is about.

Today we will talk about the events that take place in the book of Joshua. Let’s do a quick summary to get us up to this point in history.

Remember that when God made his promise to Abraham, he told him that his people would be slaves in a land not their own for 400 years and that afterward, God would bring them back to possess their own land. This is exactly what happened. They went down as sojourners to Egypt, and then when a new Pharaoh came on the scene, he put them in slavery. Moses then rises up as their deliverer, and God brings them out with great possessions to wander the wilderness for forty years. During this time, God gives them victory over everyone that opposes them, which will bring us up to the book of Joshua.

The Faith of a Pagan

The first city of the Promised Land that they face is Jericho. This is a city surrounded by walls that seem impenetrable to the people of Israel. So, Joshua sends in two men to spy out the land. This is where we first meet up with Rahab.

Now Rahab is not a godly woman. Not only is she living in a sinful environment, but she has a very sinful profession.

She makes her living sinning against God’s design for marriage. In other words, she is an unlikely convert, but look at what she does. She risks her neck to save these foreigners. Why would she do that? It’s because she has heard all about the God of the Jews.

Before the men lay down, she came up to them on the roof  and said to the men, “I know that the LORD has given you the land, and that the fear of you has fallen upon us, and that all the inhabitants of the land melt away before you.

For we have heard how the LORD dried up the water of the Red Sea before you when you came out of Egypt, and what you did to the two kings of the Amorites who were beyond the Jordan, to Sihon and Og, whom you devoted to destruction.

And as soon as we heard it, our hearts melted, and there was no spirit left in any man because of you, for the LORD your God, he is God in the heavens above and on the earth beneath.

Now then, please swear to me by the LORD that, as I have dealt kindly with you, you also will deal kindly with my father’s house, and give me a sure sign that you will save alive my father and mother, my brothers and sisters, and all who belong to them, and deliver our lives from death.”

Rahab is confessing Yahweh and putting her faith in him. This is amazing and not at all what these spies were expecting. She knows that the God of the Jews is the Creator God of the universe, and she is exercising her faith by protecting these spies. What a cool conversion story!

And the Walls Came Tumbling Down

You are probably familiar with the rest of this story. God gives them an unprecedented, miraculous victory where he displays his power. The children of Israel are victorious, and Jericho falls… but not all of it. There is one room in the city wall that is kept safe. In God’s amazing providence, the whole wall falls down, but Rahab and her family survive unharmed. It’s really cool because, at the time of the writing of the book of Joshua, the original readers would have still known Rahab. In Joshua 6:25, it says, “She has lived in Israel to this day.” How cool is that?!

If this were the end, it would still be such an amazing story. God is finally fulfilling the promise. He told Abraham that his people would come back into this land, and it was happening. Not only are we seeing the expansion of the kingdom geographically, but we are seeing the expansion of the kingdom spiritually. We are getting to see a glimpse at how God is going to bless the whole world through Abraham by including the Gentiles. And we are again seeing God’s grace and justice together. Just like God gave a promise in the middle of a curse way back in Genesis 3, now he is exercising justice against sinners while extending favor to his people (which now include Rahab’s family).

But then it gets even better. After her introduction here in Joshua, we do not see Rahab again until Matthew 1:5, where she is mentioned in the line of Jesus

… and Salmon the father of Boaz by Rahab,

How crazy is that? God redeems this sinful woman not just to save her from the destruction of Jericho but to appoint her to be part of the plan of salvation to the whole world.

When we look at all the people mentioned in the line of Jesus, we should be blown away by God’s grace. It would be easy to think that God should use the best of the best, that He would only choose perfect people to do His work, but that is just not the way that God operates. Rahab was a sinful woman, making her living in a sinful profession, yet God chose her to play a part only she could play in His plan to bring salvation.

Today, we should pause and meditate on how amazing God is to orchestrate all of this to accomplish his work in the world. If he could use Rahab, then he can easily use us. We just need to put our faith in him.

“Then all the people who were at the gate and the elders said, “We are witnesses. May the LORD make the woman, who is coming into your house, like Rachel … Continue reading

“The LORD your God will raise up for you a prophet like me from among you, from your brothers—it is to him you shall listen— just as you desired of … Continue reading