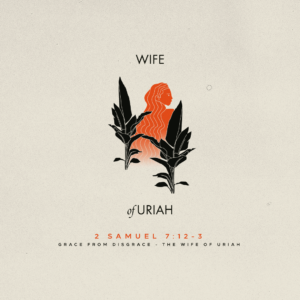 Advent 13: Grace from Disgrace – The Wife of Uriah

When you read through the genealogy of Jesus in Matthew, you’ll notice that there are five women who show up in the line of Jesus, but only four of them are mentioned by name. This one is simply called “the wife of Uriah.” Isn’t that interesting?

Why wouldn’t Matthew mention the name of this woman?

I think it’s because this isn’t a particularly bright spot in Israel’s history. This episode in King David’s life is not something that they were proud of. It gets even more interesting when you realize that Matthew was writing to a mostly Jewish audience who would have known all about who this lady was. I think the reason Matthew didn’t mention her name is probably the same reason you don’t know many ladies named Bathsheba. They didn’t want to keep remembering what happened.

There are two things that everybody remembers about King David. The first is that he killed Goliath and the second is his relationship to Bathsheba. We hear all about this in 2 Samuel 11. At the beginning of the chapter, there is some not-so-subtle foreshadowing that should tip us off that something bad is going to happen. It says,

In the spring of the year, the time when kings go out to battle … but David remained at Jerusalem.

There you have it. David is the king that had “slain ten thousand.” He should be out there with his men, leading them in battle, but instead, he’s lounging around the palace in the middle of the afternoon. It’s pretty embarrassing.

A Man of Honor

The rest of the story is even worse.

David sees a beautiful woman and asks about her.

Even though he knows that she is married to one of his most valiant soldiers, it doesn’t stop him from pursuing her.

Soon afterward, he finds out that she’s pregnant and tries to get her husband to come home to be with her so that everyone will think that her husband is the one that got her pregnant. This plan might have worked except for the fact that her husband was way more honorable than David. Uriah would not come home and enjoy the comfort of his normal life while the army was out in battle. How ironic is that? The king didn’t care that they were at war, but the soldier did.

After all of this, when David couldn’t think of anything else to do, he sends Uriah to the front line of battle and orders everyone around him to retreat. Who knows how many people David ordered to their death just to cover up his sin?

A Paradigm for Repentance

No wonder the Jews wouldn’t want to mention this story. It records the failures of one of their most beloved kings. But in God’s crazy irony, not only do we get to see David’s sin, but we get to see his repentance. God sends a prophet to show David his sin, and he repents. And, he repents hard. It is out of the depth of his repentance that he writes one of the most often read and quoted psalms in all of Scripture, Psalm 51. This little psalm is so rich because we get to see David’s genuine brokenness before God, and it gives us words for us to pray when we have sinned before God.

Isn’t this always the way God works? He is constantly working all things out to bring about his will, even in the middle of terrible situations. It’s crazy because, before all of this, God had promised David a son that would rule on a throne forever. And do you know who God would use to bring that about? You guessed it, Uriah’s wife. Bathsheba would give birth to Solomon, who would rule on the throne of Israel and Judah. His kingdom would come to an end, but generations later, another king would be born, not in a palace, but in a stable. And his kingdom will last forever.

“Therefore the Lord himself will give you a sign. Behold, the virgin shall conceive and bear a son, and shall call his name Immanuel.” – Isaiah 7:14 Double Rainbow We … Continue reading

“Then all the people who were at the gate and the elders said, “We are witnesses. May the LORD make the woman, who is coming into your house, like Rachel … Continue reading