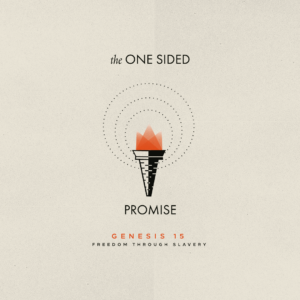 “On that day the LORD made a covenant with Abram, saying, “To your offspring I give this land”

If you haven’t done it yet, you should really read this whole chapter. But if not, let’s walk through it and show how God is continuing the promise to Abraham.

When the chapter starts out, Abraham is bummed because he still doesn’t have a child of his own. He tells God that he still doesn’t have an heir to inherit the promises that God gave to him. This is where God takes him out and shows him all the stars in the sky and promises him that he is going to give him that many descendants and that they would come from his own son.

It’s at this point that God makes the covenant official. To our modern eyes, this might look really weird. I mean, why would God have Abraham cut these animals in half? For us to understand what is happening, we need to have a little knowledge of ancient covenants.

It was common in their culture to perform ceremonies like this where two people would come together and make a promise to each other. Then they would cut open an animal and walk together in between them. In doing this, they were saying that they were so serious about keeping their end of the bargain that if they didn’t keep their word, then they should get cut in half just like these animals. Crazy, right?! You had to be really sure you could keep your promise before you would commit to something like this.

What gets really interesting is that Abraham didn’t walk through the animals. Only God did. You see, God put Abraham into a deep sleep and went through the covenant ceremony by himself. This means that God is taking the full responsibility to keep the covenant on himself. This is awesome because if it was going to be up to Abraham to fulfill it, then he would fail. He couldn’t even have a kid on his own. But thankfully, God will always keep his word.

Now we get to the hardest part of the covenant to understand. Let’s look a little closer at the words that God says to Abraham when he makes this promise. God says,

“Know for certain that your offspring will be sojourners in a land that is not theirs and will be servants there, and they will be afflicted for four hundred years. But I will bring judgment on the nation that they serve, and afterward they shall come out with great possessions.”

Did God just promise Abraham that his descendants will be slaves?

Yep, you read it correctly.

That is fascinating. What in the world are we to make of this? We need to realize that God is sovereign over all of the things that happen in the world, and even when it looks like he might be out of control or that his people aren’t experiencing the good things we think they should be experiencing, God is still keeping his word. And with the people of Israel, part of the promise was to make them great. You and I might have just showered dollar bills on them, but God did it by taking them into slavery and then sending them out with “great possessions.” (See also Acts 13:17)

As we look back on all that God did leading up to Jesus, we can be confident he is truly in control. There will be plenty of times in this journey leading up to Christ’s advent where we are not going to have any clue how God is going to pull this off, and then all of a sudden, he will. Not only this, but as we reflect back on how God has kept his promises, we can be even more confident that he will continue to keep his promises.

Let’s Talk About It:

“And God said to Abraham, “As for Sarai your wife, you shall not call her name Sarai, but Sarah shall be her name. I will bless her, and moreover, … Continue reading

Advent 2: Blessing To The Whole World

“Now the LORD said to Abram, “Go from your country and your kindred and your father’s house to the land that I will show you. And I will make … Continue reading