“Behold, the days are coming, declares the LORD, when I will raise up for David a righteous Branch, and he shall reign as king and deal wisely, and shall execute justice and righteousness in the land. In his days Judah will be saved, and Israel will dwell securely. And this is the name by which he will be called: ‘The LORD is our righteousness.“ 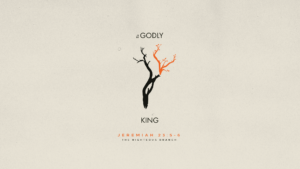 When you read this passage, you can’t help but get excited. This is absolutely filled with hope. There is a king coming from the line of David who is going to bring salvation. The reason why this is encouraging for us is because we are looking back at it through the lens of the stable. We know that this is talking about baby Jesus born from David’s line in David’s town.

However, the Jews to whom this was originally written were in a completely different context. Some of them had been taken into captivity, and some of them were getting ready to be taken. They have a “king,” but he’s just a puppet set up by a conquering army. He has no power.

Imagine you were in that situation. How much more meaningful would it be to know that God was going to send a real king? And not just any king either, this king would be like David (one of his actual offspring), and he would really rule and reign. Not only that, but he would bring peace. Remember that at this time, God’s people had already been split into two nations (Israel and Judah), each with separate kings. The king that Jeremiah was promising would be a king to bring unity and peace.

There would be no more wars with Assyria or Babylon.

There would be no more deportation to foreign lands.

God’s king would be in control.

You don’t have to look too far to realize that there is more going on here. Look at the attention given to “righteousness.” In just these two verses, we see it mentioned three times. First, we see that God is going to raise up from David’s line a “righteous” branch. This is a really big deal for several reasons. It’s important because even before Israel had their first king, God laid out how a king was supposed to reign. He wasn’t supposed to get a ton of wealth for himself; he wasn’t supposed to marry a bunch of women, and he wasn’t supposed to make a huge army. Instead, he was supposed to put his trust and confidence in God and his Word. Look at what God says through Moses.

“And when he sits on the throne of his kingdom, he shall write for himself in a book a copy of this law, approved by the Levitical priests. And it shall be with him, and he shall read in it all the days of his life, that he may learn to fear the LORD his God by keeping all the words of this law and these statutes, and doing them, that his heart may not be lifted up above his brothers, and that he may not turn aside from the commandment, either to the right hand or to the left, so that he may continue long in his kingdom, he and his children, in Israel.”

The Jews knew that their kings were supposed to reign like this. They also knew that very few of them had. When you read through Kings and Chronicles, it’s easy to see that both Israel and Judah had a bad track record when it came to godly kings. Knowing this makes this prophecy so much sweeter.

Secondly, we see that this king is going to execute “justice and righteousness.” This is really interesting because it looks like he is emphasizing both sides of the coin. This new king that God was sending would punish evil (justice) and reward the good (righteousness), and he would do so perfectly. The picture of this king is starting to look like someone a little more than human.

Finally, Jeremiah tells us that his name is going to be called “The LORD is our righteousness.” Okay, now I’m certain this can’t be a human king. God’s people from both the Old and New Testaments knew that only God is righteous. If we have a king who is given this name, he must be more than just a king. Maybe when it was written, they didn’t know that, but as we look back, we know for certain that this is a prophecy about Jesus. He is the only one who could ever be appropriately called, “The LORD is our righteousness.”

So we’ve settled it. The only righteous one this could be talking about is Jesus. But is that it? Do we look back to Jesus in the manger and stop at that? No way, there is so much more. During this season of Advent, we are looking back to the first coming of Jesus and praising God for his faithfulness in sending our rescuer. However, passages like this should remind us that we are still living in between the Advents. We are still looking forward to the time when Jesus will come again. Just like the world should have been expecting him to come to Bethlehem 2,000 years ago, the world should still be expecting him to come again.

That first time he came as a humble servant. Next time, he will come as a conquering king.

That first time He paid for our sin with His death and resurrection.

This time He will come to execute justice and righteousness to all.

Thus says the LORD: “A voice is heard in Ramah, lamentation and bitter weeping. Rachel is weeping for her children; she refuses to be comforted for her children, because they … Continue reading

“But you, O Bethlehem Ephrathah,who are too little to be among the clans of Judah,from you shall come forth for meone who is to be ruler in Israel,whose coming forth … Continue reading