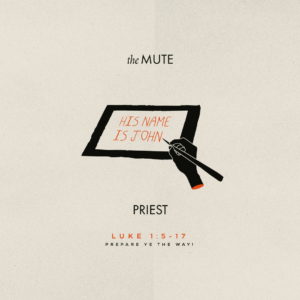 “In the days of Herod, king of Judea, there was a priest named Zechariah, of the division of Abijah. And he had a wife from the daughters of Aaron, and her name was Elizabeth. And they were both righteous before God, walking blamelessly in all the commandments and statutes of the Lord. But they had no child, because Elizabeth was barren, and both were advanced in years.

Now while he was serving as priest before God when his division was on duty, according to the custom of the priesthood, he was chosen by lot to enter the temple of the Lord and burn incense. And the whole multitude of the people were praying outside at the hour of incense. And there appeared to him an angel of the Lord standing on the right side of the altar of incense. And Zechariah was troubled when he saw him, and fear fell upon him. But the angel said to him, “Do not be afraid, Zechariah, for your prayer has been heard, and your wife Elizabeth will bear you a son, and you shall call his name John. And you will have joy and gladness, and many will rejoice at his birth, for he will be great before the Lord. And he must not drink wine or strong drink, and he will be filled with the Holy Spirit, even from his mother’s womb. And he will turn many of the children of Israel to the Lord their God, and he will go before him in the spirit and power of Elijah, to turn the hearts of the fathers to the children, and the disobedient to the wisdom of the just, to make ready for the Lord a people prepared.” 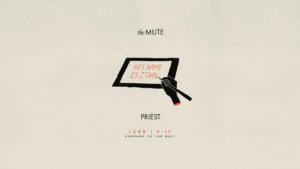 We are one day out from Christmas, so it only makes sense that we talk about John the Baptist today. After all, he is the one who prepares us for the coming of Jesus. When we take a minute to step back from this story and look at it in light of the rest of the Bible, we are struck with some really interesting similarities regarding the way God works in history.

Have you noticed that God seems to prefer working in similar ways at different times?

Take this situation, for example. You have an older couple that God has decided to work through who are beyond the childbearing years. Then all of a sudden, you have a messenger from Heaven tell them that they are going to have a baby boy. Sound familiar? Yeah, this is very similar to what happened with Abraham and Sarah. The difference in this situation is that it’s the dad who didn’t believe.

Here we have Zechariah. He is taking his turn, offering up prayers and incense in the temple. Then out of nowhere, the angel Gabriel appears to him, and Zechariah freaks out.

Of course, he did! I couldn’t imagine the shock that he experienced. I’m picturing him closing his eyes in prayer and then opening them to move on to the next candle he’s supposed to light, and BOOM! There’s an angelic warrior right there with him in this sacred space. No wonder Gabriel has to tell him to not be afraid.

Now I understand that he’s old and his wife Elizabeth is old, but you would think that sending Gabriel to tell someone something would be enough to convince him of just about anything. I mean, we’re talking about an angel that just came from standing before God. But he didn’t believe… and Gabriel knew it. So, since he didn’t believe, Gabriel tells him that he won’t be able to speak until his wife has her baby boy.

I’m assuming that as soon as Zechariah gets struck with silence, it all starts coming together. Look at the content of what Gabriel said to him. His son is going to be filled with the Holy Spirit of God and go before the Lord. He is going to go in the spirit of Elijah and turn the hearts of God’s people to him to prepare them for his coming. His son is the fulfillment of dozens of prophecies. I’m sure he was so humbled by these realizations.

The good news is that we know that he finally did get it. Eventually, his wife has the baby and the day comes for them to name the boy. Everyone there just assumed that they would name the boy after the father, but then Zechariah breaks the silence, speaks up, and says, “His name is John.”

And that’s not all he says. Once he started talking, he just kept ongoing. He obviously caught the Christmas spirit. Look at his words to his newborn son.

And you, child, will be called the prophet of the Most High;
for you will go before the Lord to prepare his ways,
to give knowledge of salvation to his people
in the forgiveness of their sins,because of the tender mercy of our God,
whereby the sunrise shall visit us from on high
to give light to those who sit in darkness and in the shadow of death,
to guide our feet into the way of peace.”

Time to Get to Work

The Lord sent John to go before Jesus and announce his coming. What’s crazy is that he started doing this even before he was born. Here’s how it all shakes out. First, Gabriel goes to Zechariah to announce the birth of John. Then he goes to Mary to tell her about Jesus. In fact, part of the proof Gabriel offers to Mary to help her believe the crazy message that he’s giving her is that her elderly cousin, Elizabeth, is pregnant too. After this, when Mary goes to visit Elizabeth, John actually jumps around inside of Elizabeth.

What?! This is unbelievable! Before John is even born, he is pointing people to Jesus!

Tomorrow we are going to celebrate the birth of Jesus into the world. It is so easy to get side-tracked and derailed into focusing on countless things that don’t matter. But we need to remember that we are celebrating the fact that God came to Earth. Today, as we have looked at the miraculous birth of John the Baptist, we need to realize that God has gone to great lengths to show the world the love that he has for us. He sent a miracle to proclaim an even greater miracle, and we are the recipients of it. We should respond the way that Mary did when Elizabeth told her how John was jumping inside her.

“My soul magnifies the Lord,
and my spirit rejoices in God my Savior,
for he has looked on the humble estate of his servant.
For behold, from now on all generations will call me blessed;
for he who is mighty has done great things for me,
and holy is his name.
And his mercy is for those who fear him
from generation to generation.”

God has indeed blessed us with His presence. We cannot miss it.

“In those days a decree went out from Caesar Augustus that all the world should be registered. This was the first registration when Quirinius was governor of Syria. And all went … Continue reading