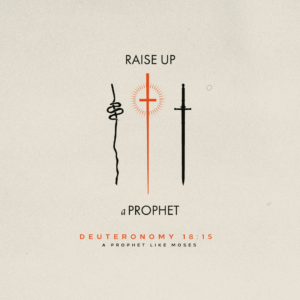 “The LORD your God will raise up for you a prophet like me from among you, from your brothers—it is to him you shall listen— just as you desired of the LORD your God at Horeb on the day of the assembly, when you said, ‘Let me not hear again the voice of the LORD my God or see this great fire anymore, lest I die.’ And the LORD said to me, ‘They are right in what they have spoken. I will raise up for them a prophet like you from among their brothers. And I will put my words in his mouth, and he shall speak to them all that I command him.” 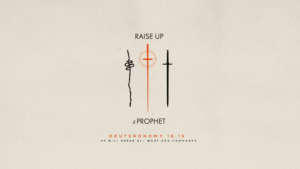 First off, the book of Deuteronomy is one of the most enjoyable books to read. It’s so good, because in it we get to see God’s heart for his people. It is constantly talking about how special these people are to God and how special God should be to this people. It’s really good.

Anyway, it is basically a series of sermons that Moses is giving to prepare the people for the Promised Land. One of the biggest reasons why Moses is doing this is because he is not going to get to go in (that, and he is recording the Word of God for God’s people). And part of preparing the people for their next chapter is the passing on of the leadership from Moses to Joshua.

Joshua, but Not Joshua

If you are reading through the Old Testament and you come across this passage, it seems pretty cut and dry that Moses is transferring the authority to lead over to Joshua. But there is more going on here. This is another one of those situations where we see God giving a promise that will have more than one fulfillment.

First, let’s look at Joshua. Is it fair to say that he is a prophet like Moses? Absolutely. Let’s look at a few examples. In Joshua chapter one, God has a conversation with Joshua where he appoints him to lead the people of Israel. Several times in this conversation, God tells him to “be strong and courageous.” To back it up, he tells him, “Just like I was with Moses, so I will be with you.” God is the one that actually makes the comparison between Joshua and Moses.

In addition to that, in 4:14 the people seem to acknowledge that he is like Moses. Scripture says,

If you needed any more confirmation that Joshua is the guy, look at 5:13-15

When Joshua was by Jericho, he lifted up his eyes and looked, and behold, a man was standing before him with his drawn sword in his hand. And Joshua went to him and said to him, “Are you for us, or for our adversaries?”And he said, “No; but I am the commander of the army of the LORD. Now I have come.” And Joshua fell on his face to the earth and worshiped and said to him, “What does my lord say to his servant?” And the commander of the LORD’s army said to Joshua, “Take off your sandals from your feet, for the place where you are standing is holy.” And Joshua did so.

Where have you seen this before? Just like God commissioned Moses at the burning bush, so now God is commissioning Joshua. And he tells both of them to take their shoes off because they are standing on holy ground.

But, the most interesting aspect about all of this is that the people of Israel still were looking for a prophet to come. Somehow they realized that Joshua was God’s appointed man for the moment but thought that God was still sending someone else. Maybe it’s because the promise in Joshua 1 had so much about God’s Word being in the prophet and that he would speak for God. Maybe it’s because Joshua eventually died, and they still needed a leader. Whatever the reasons, we can see from the testimony of the New Testament that they were still looking for the coming of this new prophet.

In John 1, when the Jewish leaders see John the Baptist, they ask him, “Are you the prophet?” Apparently, their study of the Old Testament had led them to believe that they were still waiting for the Christ, Elijah, and the prophet. Pretty cool. Then, in Acts 3 when Peter is preaching, he refers to Jesus by quoting this passage from Deuteronomy. And finally, in Acts 7, we see Stephen saying the same thing about Jesus.

As we continue to get closer and closer to the birth of Jesus, we need to constantly keep these truths in front of us. Over and over in the pages of Scripture, we can see God planning and working out all of these things. Sometimes we get to see the way it works out, and sometimes we don’t. With this prophecy that Moses prophesied, we actually get to see it work out twice. Joshua comes onto the scene to lead God’s people as Moses did. Joshua was faithful, and we can praise God for him.

But when Jesus comes on the scene, he does what neither Moses nor Joshua could have ever dreamed of. Moses led his people out of 400 years of slavery in Egypt, but Jesus leads his people out of an eternal slavery to sin. Praise God that he would send this baby to be our prophet, priest, and king!

“… and Salmon the father of Boaz by Rahab,” Matthew 1:5 Don’t Forget the Land For the people of Israel, the most tangible part of God’s covenant with them was … Continue reading

Advent 9: By Any Means Necessary