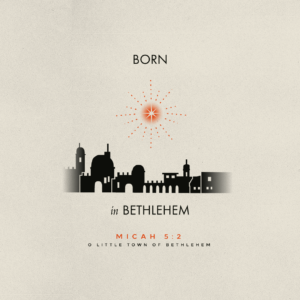 “But you, O Bethlehem Ephrathah,
who are too little to be among the clans of Judah,
from you shall come forth for me
one who is to be ruler in Israel,
whose coming forth is from of old,
from ancient days.” 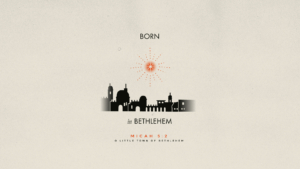 Some Prophecies are Harder than Others

Depending on who you ask, it is possible that Jesus fulfilled a couple hundred prophecies from the Old Testament. That is absolutely incredible! Some people will go on and on trying to figure out the odds of this happening so that they can show that no mere human being could possibly accomplish this, and therefore Jesus must be God. I couldn’t agree more.

In fact, one of my favorite illustrations comes from a book published by a guy named Stoner in 1957 called Science Speaks. He said that the odds of Jesus fulfilling just eight of these prophecies would be the same as if you covered the state of Texas with silver dollars two feet deep, marked one with a checkmark, blindfolded someone, and then they walked around and picked the marked silver dollar on their first try.

You see what he’s saying? That’s just not possible.

When we look at the text for today, in light of this, we are faced with some really interesting questions. In the above scenario, we are talking about an adult attempting to fulfill these prophecies, but what about the prophecies about stuff that had to happen before the Messiah was born? What about where you’re born? Or where you move as an infant? What about your ancestors? See what we are getting at here? No one has ever been able to plan the city in which they were born… no one that is, except Jesus. And the reason he was able to do this is because he was and is God.

Just like with many of these prophecies, this one looks really clear to us as we look back. But what did the Jews in the time of Jesus think about this? Did they know that it was a prediction of the Messiah? This is a difficult question to answer because it looks like it’s a mixture of yes and no.

First, let’s look at the “no.” During the time of Jesus, the Jews could be separated into two basic groups of people: those who were looking for the coming Messiah and those who weren’t. It might sound weird to say this, but from the New Testament’s witness, it looks like most of the religious leaders of the day fell into the category of the ones who weren’t. They had built up their own power and influence, and they were not ready to hand that over to anybody, not even the Messiah.

On the other hand, we see faithful Jews who were raised on the Old Testament and longed for the Messiah to come. This makes sense too. These were the common Jews who didn’t have any of the power of the leaders. They were the ones who felt the oppression by the Romans the most. Of course, they were looking for their deliverer.

We see these people showing up as real seekers in the Gospels. In John, there is an interesting interaction between these two groups of people. Jesus has gotten up and told them that he is God and that there is hope only in him. Some of them say, yes, “He is the prophet” or “He is the Messiah,” but some say it’s not possible because Jesus is from Galilee (remember he moved a couple times as a kid). Look at verse forty-two.

“Has not the Scripture said that the Christ comes from the offspring of David, and comes from Bethlehem, the village where David was?”

The Messiah to the Gentiles Too

But this isn’t the only place in the New Testament where this comes up. We also see it as part of the Christmas story. From somewhere in Persia (way, way east of Israel), some guys were studying the stars who noticed something so remarkable in the sky that they had to go check it out. Apparently, they had studied the Old Testament (specifically Numbers 24) and were looking for a star to rise that would announce to the world the promised ruler of the Jews.

How crazy is this?

God sent a sign, visible to the whole world, and the only ones who picked up on it were this group of wise men. Anyway, they see this sign and go to check it out. But, where do they go? Bethlehem? Nope, they go to Jerusalem, the capital city, where the king is supposed to be. Yet when they arrive, there’s no new baby that fits the timeline, so Herod gets all his wise men together, and they tell him that it has to be Bethlehem, and they quote this passage.

The best and worst parts of this story are the reactions of Herod and the wise men. The wise men, who are Gentiles, recognize what God is doing here. They have studied the Jewish Scriptures and believe that Jesus is God incarnate. They traveled for months to find this child so that they could worship him. This isn’t just some kind of academic interest. When they finally find Jesus, they fall on their faces in worship.

But Herod, who is Jewish, who should be looking for his Messiah, will have nothing to do with Jesus. He lied to the wise men telling them that he wanted to worship him too, but when he figures out where Jesus is, he tries to kill him.

What makes all of this so mind-boggling is that the Old Testament is a several thousand-year period of God calling his shots. Then in the New Testament, we see a record of him sinking every one. What an amazing, powerful, and loving God we serve. He has always kept his promises, and he always will.

In his grace toward mankind, God let us know the exact place that Jesus would be born. And as if that wasn’t enough, he planned out the biggest billboard ever to announce his coming.

But let’s not look down on those people who didn’t get it when it was happening. It had to be really crazy to be living in a time when hundreds of prophecies were all coming together. Instead, let’s step back and praise God for the ones who did see it, both Jews and Gentiles. And not only that, let’s help others see it today.

“Behold, the days are coming, declares the LORD, when I will raise up for David a righteous Branch, and he shall reign as king and deal wisely, and shall execute … Continue reading

“1 There shall come forth a shoot from the stump of Jesse,and a branch from his roots shall bear fruit. 2 And the Spirit of the LORD shall rest upon … Continue reading